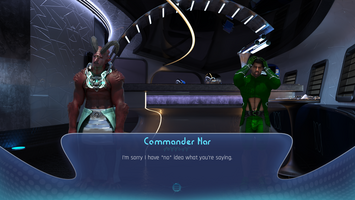 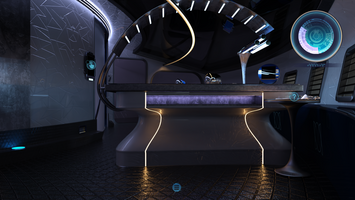 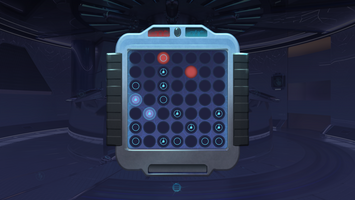 Over The Moon, the NaNoRenO 2021 game by Bob Conway, Deevilj, Illuminate001, and Robin Harper is now available for your downloading and playing pleasure!

We did something a little different this year, so the game emphasizes puzzle solving rather than typical visual novel decisions. But if you don't like puzzles, fear not: you can find some help below!

Note that the first decision in the game, after waking up on the ship, determines the game's difficulty level. There are four options:

Still need more help? Read on, but we highly recommend you try the game without help first.

We highly recommend you play without spoilers first. Several puzzles, once spoiled, will never be unspoil-able.

As the game text suggests, door puzzles involve turning certain spaces blue (or red) based on the symbols. To check an answer, hit the blue button on the top right. If the answer is correct, the background with change to blue, and a blue "continue" button will appear at the bottom of door puzzles. The top left red button will simply exit out of the puzzle. (If you've already completed a door puzzle and opened the door, the blue "continue" button will not appear again, even though you can reattempt the puzzle.)

Door puzzles (and hint consoles) can be repeatedly attempted, even after the door is unlocked. Hint consoles do not unlock anything when completed. Re-attempting puzzles and experimenting can help you understand the meanings of symbols.

On easy and simplified modes, the door puzzles will color code spaces for you so you know if they should be blue or red. White spaces indicate "some of these should be blue".

You wake up in this room on the ship. The door puzzle symbol simply wants to be blue.

The first room after the research room. The new door puzzle symbol wants to NOT be blue. (Both red and unselected states are acceptable.)

The other puzzle wants you to select the "odd one out"... use the number of circles on each character to determine which does not belong. On Simplified and Easy modes, there are fewer puzzle stages.

The door to the cryo room features a new symbol that simply indicates all orthogonally-adjacent spaces should NOT be blue. (Both red and unselected states are acceptable.)

In the cryo room itself, the puzzle wants you to drag the small spinning circles to the matching larger spinning circles. Upon completion, you'll be presented with two options: You can either leave the stasis chamber as-is (blue button) or deactivate it to wake Oon (red button). Deactivation will ask for confirmation (confirm deactivation with the red button). This puzzle does not change in simplified or easy modes.

The door to the cafeteria features a new symbol that indicates that all orthogonally-adjacent spaces should be blue.

The puzzle in the cafeteria is a jigsaw puzzle. This does not change in simplified or easy modes.

The situation room is reached from the "lower" hallway (head down from the hallway outside the cargo room).

The door puzzle has a new symbol that wants exactly one orthogonally-adjacent space to be blue. (The other spaces can be either red or unselected.)

The engine room is the right room in the "upper" hallway (head up from the hallway outside the cargo room).

The door puzzle has a new symbol that inverts the meaning of all orthogonally-adjacent symbols. (Where they previously wanted blue, they now want red or unselected, and vice versa.)

The engine room puzzle itself, on hard or hint modes, is Mastermind. On simplified or easy modes, the puzzle will instead directly give you feedback on the correctness of each symbol for each position. Completing this puzzle, as the game suggests, unlocks a puzzle back in the...

Return to the research room for a new puzzle, which is simply a game of "repeat after me". On easy and simplified modes, the puzzle will complete after fewer stages.

Completing this puzzle converts all alien text to English, making the bridge easier to tackle. (You can also complete this puzzle earlier to convert alien text in other puzzles to English, although this does not affect the cargo room puzzle.)

The bridge elevator is on the left of the upper hallway. The door puzzle features a new symbol that always appears in threes, and wants exactly one of the three to be blue. (The other two must be red or unselected.)

Entering the bridge will immediately trigger the end of the game. (The end of the game will also be triggered after 30 minutes of puzzle solving; time spent reading dialogue or using hint consoles does not count toward this limit.) Depending on what rooms have been unlocked, you'll get the choice to either try and solve a bridge puzzle, wake Oon in the cryo room, or do nothing.

There are two different bridge puzzles. The weapons (on the right of the bridge) are simply a more complicated door puzzle (with a time limit).

The engines (on the left of the bridge) require you to keep the meter within a narrow range for long enough that the engines can spin up. If you've converted the alien text to English, the buttons will be easier to understand. On easy and simplified modes, the meter will also indicate its current value.

There are six possible endings to the game. In order of best to worst:

Get Over The Moon

I think this is a neat game but by the time you get to the elevator puzzle, even somewhat understanding what all the symbols mean, some symbols seems to restrict other symbols by some sort of interaction and its hard to figure out what the correct solution is. i've manager to get to the main deck a few times, but that puzzle just gets extremely confusing due to the "S" symbol with dots on either end. What you state here is that symbol needs only 1 adjacent blue space. But from testing it seems like it wants adjacent spaces to do the opposite of their rule, or have no restriction, ex. hollow circle now must be filled, circle with dot and curve inside must be empty, etc.

I think what would be helpful would be aside from those practice tablets should have series of puzzles to help you learn icon interactions, rather than just one that you sorta fumble through, find the answer, leave the tablet, go back for a new random puzzle with the new symbol andmaybe figure out new interactions.

The situation rooms symbol practice seems the most apparent to need this, since it doesnt seem to do what it says it should here on the page. additionally this inversion symbol has an impossible interaction with the pentacircle as, one of the 3 must be blue and no more, but inverted one must be red/blank and no more, and if there is an inverted and non inverted pentacircle its impossible to solve.

No puzzles are impossible -- S symbols don't invert the pentacircle, and the practice tablet for the S symbols should include every other symbol (eventually) if you keep retrying it long enough since those are also randomly generated.

(Also red and blank are treated the same for all symbols... the ability to turn spaces red was just for player sanity to mark off things that couldn't be blue.)

I don't *think* I made any mistakes in the above puzzle spoilers? It's possible you're confusing the Situation Room and the Engine Room... The Engine Room is the one next to the bridge elevator. (The solutions above are arranged in order you'll encounter new symbols in the door puzzles.)

I really have a hard time doing the cryo chamber one even with the explanation... Is it the spinning of the circles that have to be matched...or both...also this one is kind of dizzying.

I should slow down (or stop) the spinning in easy mode :)

also can be dissioratin for some people, even for me I got dizzy a bit... but I am often also too long at the computer so yeah...

...I'm sorry, these puzzles make literally no fucking sense at all. It's on Easy Mode and I can't even begin to figure out what the *goal* is. These are not puzzles, these are straight guessing games.

Hey, thanks for the comment. I'm sorry you're finding them frustrating.

Are you having trouble with the interfaces (i.e. figuring out how to submit or manipulate a puzzle) or with actually solving the puzzles themselves?

The puzzles all involve a bit of trial and error -- figuring out how they work was intentionally part of the puzzle design. But I'm not against adding more explicit hints or some sort of in-game guide for easy mode.

I just want to know *what the end result should be*. That is not even slightly clear. I had to read the walkthrough for the door puzzle on easy mode, and *still* was incredibly confused what to click to accomplish that because 90% of the interface is wholly irrelevant. There is just way, way, way too much random noise.

I haven't tried it, but almost feel it may be easier on hard mode because, presumably, more of it is relevant and not just noise.

Would it help if the first door puzzle gave some more explicit tutorial, complete with pictures?

Something like "It looks like I can click circles to change their colors, and clicking the big blue button here <show arrow> attempts to submit the puzzle. This bottom section <arrow> looks like a button that might appear once I have it correct. It looks like the background color tells me what color a space needs to be.

That should hopefully carry through pretty well to the other door puzzles, and hopefully the non-door puzzle interfaces are straightforward (even if the method for solving them isn't).

I tried the door puzzles (I've seen two so far) on Hard and it makes *perfect* sense -- but only because I already know what the blue button does at the top. I also now realize I did the door puzzle completely wrong on Easy, and yet it still worked, so... that's probably a bug.

I still have zero comprehension of the other puzzle.

There are no bugs as far as I'm aware... not every space is meaningful for the solution, so you can freely change spaces that are not impacted by symbols.

Honestly, the figuring out the interfaces (and what you're supposed to do) is also supposed to be part of the puzzles, because you were just thrown into an alien spaceship for a species you'd never met before... but I want easy mode to provide whatever help people feel is necessary to complete the game.

(However, completing non-door puzzles is not necessary to complete the game, so I'm less inclined to provide tons of in-game help on those.)