I've pushed a new game release, with a bunch of bug fixes in it. If you're already happily playing YAGS, there's nothing new here, so don't feel like you have to update.

If you do, though, note that the nudity patch version has also been bumped, due to some changes to Adam's sprite. As such, you'll need to make sure the patch and core game match.

There's been a lot of questions lately asking for game tips, particularly around the secret route. I figured I'd compile some tips here.

If you haven't played the game yet, I recommend you do not read on. Spoilers ahead!

The two hardest guys in the game are James and the secret route (Adam). Both of them become significantly easier if you play in Easy Mode (which unlocks once you've beaten the game once).

To successfully date James, you should maximize the time you spend with him, which means successfully visiting Q&A at the first possible opportunity (September 9). Other than that, there are two scenes you can easily miss: If you explore campus on August 26, you'll unlock a scene with him later when you can get breakfast with him, and if you talk to Janet on September 23, he'll message you and you get a chance to hang out with him.

Adam, of course, is tough for a number of reasons. In addition to high friendship requirements, you have to help him question his sexuality throughout the semester, and the way you do that is via Carlos.

However, if he likes you enough but hasn't freaked out, he will come out to you instead, on October 6. This is the first requirement for Adam, and is probably the toughest. (It's not enough to reject Carlos if he asks you out, as Adam wouldn't consider you an option if he knew his best friend had any interest in you.)  Other than that, you have to keep up on homework and studying, ensure that Adam is aware of your attraction to him, and generally spend time with him.

It's also worth noting that there are two things that can make Adam harder (if not impossible): If you take him to Q&A, your friendship takes a sizable hit, so you should take Jake instead; and if you're present and intervene when the incident with Robert and Elliot occurs, you'll get a large boost.

I wanted to close this (rather long) devlog with some shoutouts.

First off, of course, is Coming Out On Top by Obscurasoft. If you haven't played that game yet, I recommend it.

Second, if you enjoyed YAGS and are wanting some more BxB romance games, check out Human Cargo (by Rob Colton), the first part of Where the White Doves Rest (by Hijiri), or Incubus Academy (by Deevil).

Finally, YAGS has gotten a few Let's Plays recently, but only one of those (by the amazing EnbyKaiju) is complete. You can check that, and other YAGS-related stuff, out at my Youtube channel.

The sequel to YAGS (ZAGS) is underway, so we'll actually close this with a preview of the new hairstyles for the returning cast. 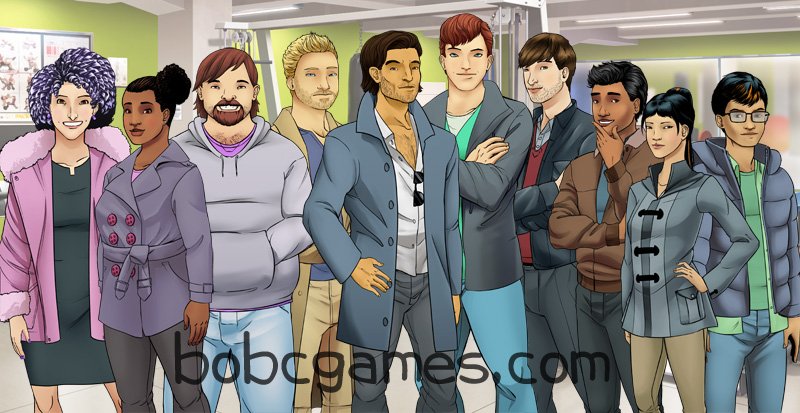 Download Now
On Sale!
15% Off
Name your own price

The romance with Carlos and James is beautiful. What bothers me is having to hurt or give false signals to Carlos to be with Adam. I would like you to reveal that and change the script for Adam, she is a character that I love but Carlos is too special to have a bad time.
James, I love how in the end it turns out to be all cute and a bit silly, xD
Adam, as I said, I find it difficult to get to him, but not because of the difficult ones, but because of the requirements: Carlos.
Carlos: it's perfect, the skin, the face, the body, the size of the penis. The only thing that bothers me is that he never said "I love you" to his boyfriend. I know it's implied, they get married and everything ... but I'd like him to tell  to his hubby.
Dan is meh, I don't like him. I like sex but not like that, it reminds me of those serial stalkers. Nathan is the worst.
The romance with Jake reminds me of Merrill or Sera from Dragon Age: very childish and strange.
Hannah and Nik are perfect, the Liz are like two mothers, xD. The twins are fine, they play the role of bitches.

It's less that you're giving false signals to Carlos, and more that you're helping him navigate his first sorta-crush in a way that doesn't make him feel like he needs to do anything about it. You get to be his friend, and help him through coming out.

I'm glad you enjoyed the game, in general, though :)

Congratulations on YAGS, I have played it on my Android phone and had a really good time playing it. I felt the characters were very relatable and was impressed by how the story manages to offer so many choices and remain relevant. I finished 2 arcs and got 2 "lonely endings", including one that broke my heart a little (especially given how the other ending turned out for the character I tried to date). I guess it was bad luck but I wish it was a little more positive in regards to the love-life of the character at the end, with a note on how a brighter future is waiting for him after college or something along those lines, life is not so sad. In any case, YAGS gave me some inspiration for my own writing and I am really thankful for that. I'll be in for the sequel of course :)

I'm flattered the game helped inspire you in some way. Thank you for playing!

bravo, excellent game! just started to play recently (dl a good while ago but way too busy to play...), and i totally love it! somehow similar but still very different from COOT, a bit more average students but this makes them also easy to relate to. the paths i have played, 2 completed and a few kinda not finished (because i was hardcore trying to date Adam but didn't manage, lol, didn't even know for sure it was possible until i read the intro above) were interesting.

all in all, this game actually managed to get my full focused attention for hours, a feat that my fav series or other games didn't lately. especially these days ~

question: you explain this "I've pushed a new game release, with a bunch of bug fixes in it. If you're already happily playing YAGS, there's nothing new here, so don't feel like you have to update.
If you do, though, note that the nudity patch version has also been bumped, due to some changes to Adam's sprite. As such, you'll need to make sure the patch and core game match."

so.... is this related to Adam suddenly wearing a beard even i ticked off the hair option? my zip is (can't believe it..) from january 19th 2019, so looking at the zip dates' above i have the old version...  if i get those updates, my  data should remain, right? same for the patch (can't even remember having it, but i guess i do since i see full nudes) - gotta get it again, right?

I'm glad you liked the game, and thank you for your comment and nice words!

The characters' facial hair is not affected by the body hair mods. Also, if you were using a version of the patch that was not compatible with the game, you'd see a warning message both on the title screen and when starting the game, so you're probably fine.

In either case, you can always re-download both the game and nudity patch. Your saves and other progress will carry over.

anyways, thx for the infos ^^

I just married james ..... that was amazin

When do we get ZAGS

is it possible to date nate?

Not in YAGS, but perhaps in the sequel?

No happy endings for me😩

The first playthrough is likely to end with you being alone. If you turn on easy mode and pursue one of the four guys more seriously, you'll likely have better luck in subsequent plays.

But the point of the game isn't dating someone as much as developing your friendships and growing more comfortable with your sexuality, so hopefully you found it enjoyable anyway.

Thank you very much for taking time to reply to all of my comments. Its very enjoyable and I've successfully gotten Jake's ending. Nice game.

Been playing this for about 5 hours now and I love it. Totally getting a horrible ending on this first run but will try again. Really glad Obscuarasoft posted about this.

These queer film referencces are the best.

Thank you! I'm glad you're enjoying the game.

Enjoy the game very much but Adam's route is so hard i try to avoid all carlos "freakout" but still havent get him to came out on oct 6, *only manage to get him to come 1 time out 10+ run i play but he end up confess to me :(

Gotta say turning down someone is never easy. You will feel guilty by it, but you gotta do it. You must not force yourself to like someone just to make them feel better. That ain't love, it's pity.

This game man, teaching all the right questions, I love it!

Also I know how you feel about walkthrough, but at least give us list of the collectibles and their hints! There are 333 collectibles and I only managed to get 145 so far. Completing them t is gonna be a nightmare without the checklist.

Not that I want to force people to pay me, but there's a complete list of collectibles (as well as how to obtain them) in the behind-the-scenes book, which is available for $15. :)

Hi ^_^ First of all I LOVE this game A LOT <3. I know you said James was one of the hardest but ironically his was the first happy ending I got... And I'm really sad I have to go and intentionally get the bad ending because his is my favorite route >_<. A completionists struggle. Anyway, I wanted to know if ZAGS is also an acronym or if you chose ZAGS because Z comes after Y in the alphabet lol

ZAGS stands for "Zen: A Gay Sequel", but the acronym was chosen because Z comes after Y. :)

what do u mean by boost when i trigger the scene of elliot and robert? boosting my relationship with adam or boosting the impossibility to get adam? btw i really liked this game bobcgames, good day!

If you intervene, and you're currently dating someone, that boosts their affection toward you. In addition, both Adam and Carlos (of course) appreciate your attempts to help, so if you're trying for Adam, you should make sure you do so.

Wait wait wait I just found about this amazing game(through Obscurasoft, God bless her soul) and you already having a sequel underway??

Aw, thank you. I'm glad you enjoyed it.

how do I get the patch for the uncensored version?