I suspect there's an issue with itch's surveys for rewards that's not letting my view survey results, meaning I don't know where to mail your items.

If you donate for physical rewards in the future, please also follow up with an email to bobcgames (at) gmail.com, just to make sure I have the proper mailing address and other details for you.

I have a bunch of remaining writing threads to pick up (primarily IM conversations, improved planner messages, and additional scenes I've left out for now), but I'll focus on those after getting the initial alpha build out (tentatively targeted for the end of January 2021).

David completed the three in-progress CGs. Wolfscade has started coloring his CG, but it's still in progress.  General status is 12/17 CGs complete, with 1/5 in progress. 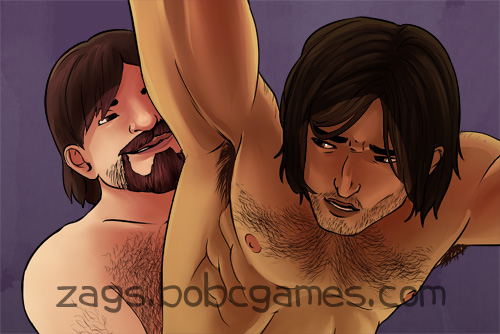 As noted above, the base writing for the game is complete! I'm currently planning on spending January getting the existing gameplay tested so I can release a (very, very early) alpha build at the end of January. Details (or apologies) will follow in January's devlog.

Hey I play (still playing lol) the demo and gotta say this is a huge improvement from YAGS (YAGS is great too by the way lol). I can't wait for the full game to be release and I hope you can add more romance routes for Carlos with other characters for example like Adam because that would make it sounds like some rom-com situation where Carlos suddenly finds Adam attractive in a different way or something and I guess playing scene like that would make me (͡ ͡° ͜ つ ͡͡°) . I guess, this kind of game just makes me want to date any men available hahaha. Anyway, keep up the good works and I hope you have a great time while getting this game complete. Stay safe and happy working!

Thanks for your kind words! ZAGS definitely has much different motivations that YAGS, but I'm glad it's working for you.

Adam is not a route. He sees Carlos as a brother, and so has no interest in anything sexual with him.